Imagine if a vast majority of football bettors weren’t just watching matches religiously, but if they spent hours and hours playing football as well. That’s the reality of esports betting, there is almost a complete overlap between esports viewers and gamers, and for gamers, experience is everything. This translates into a different betting patterns than an average sports bettor. One of the key differences being esports betting having a smaller average bet size, but higher bet volume per bettor. With each market, the storytelling aspect is richer – it’s not just who scores a goal, it’s about the adventure, for example, who will kill the first Baron Nashor in a game of League of Legend.

The esports bettors are fully immersed in the game. Games offer high level of interaction and custom experiences and this is what they look for when it comes to betting on esports as well – so the more markets the operator is able to offer in a single betslip, the more they will improve the experience for bettors, and pragmatically speaking, increase the volume of bets per bettor. Rather than splitting money across several individual stakes, punters can roll their stakes on a match into a single bet, offering a greater return on a win. It’s important to offer bets on a personal level too – this means markets oriented on the player props – for instance, how many kills will Team Vitaly’s ZyWoo have? More than 10? More than 20? 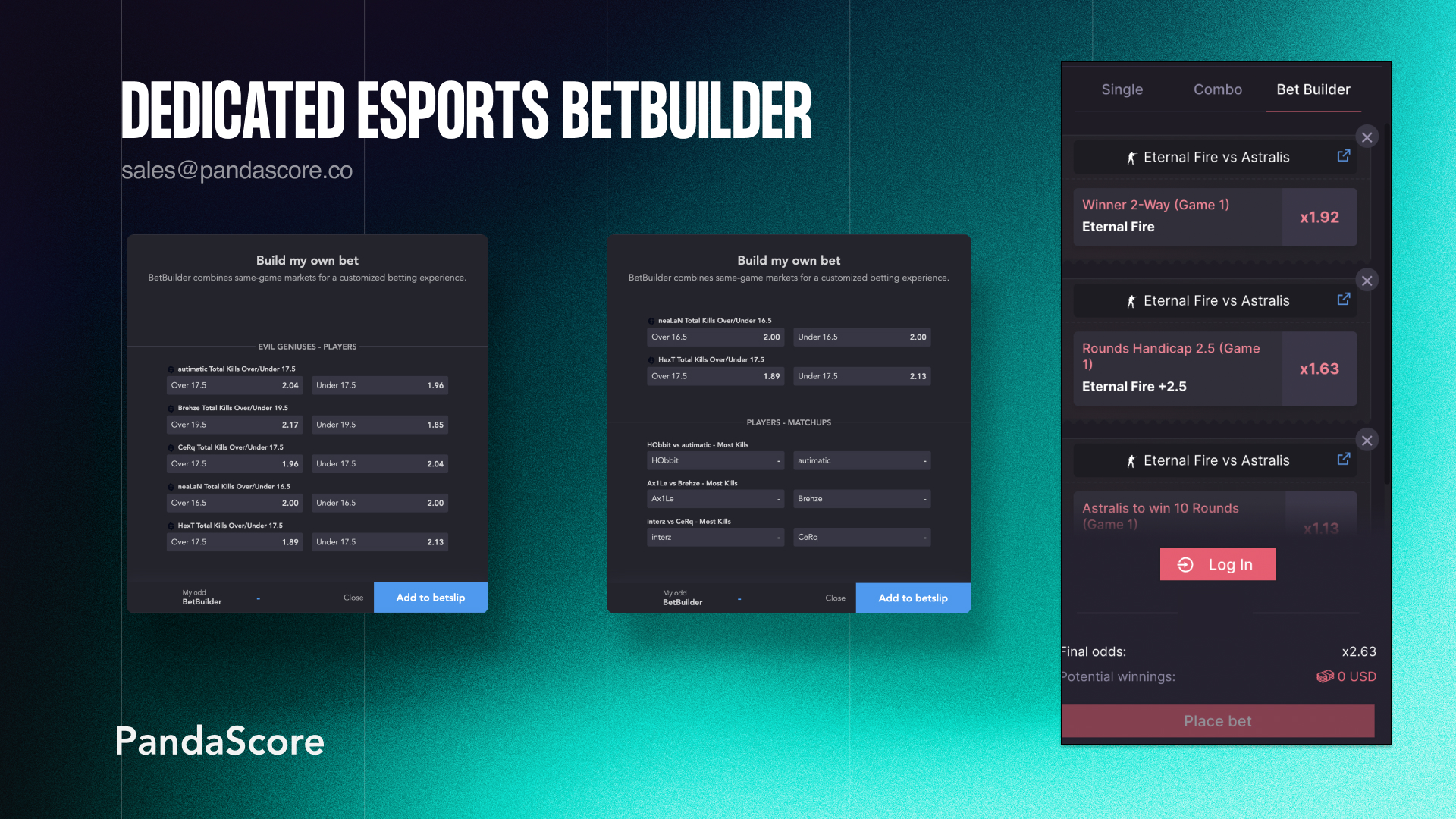 Enriching the bettor experience is the prime reason we decided to launch esports BetBuilder. The product has been in use in sports betting, but when it comes to esports, it hadn’t been done before. Our clients have already integrated and seeing impressive initial results. We’re already in production offering real BetBuilder product. This means not simply multiplying the odds, but robust data models to ensure the best odds on the combination of the markets from the same matches. PandaScore being one of the few to offer esports BetBuilder gives our partners an advantage against their competitors – the possibility to bet on multiple markets within one map is hugely sought after in the esports betting community and now with PandaScore BetBuilder, they can already do that. Combibets, the simpler version of BetBuilder was already showing the power of combining multiple bets – with margins hitting double digits, but BetBuilder takes this opportunity to a next level – now punters can combine markets from the same esports matches. Want to guess the correct round score in Evil Geniuses VS Fluxo match, but also if HexT will have more than 17 kills, and of his teammate NeaLan will have less than 16.

With more engaging betting opportunities available to punters through BetBuilder, operators can better engage with esports fans through the means that work best for them: becoming a value add embedded within the whole entertainment experience of watching professional esports. Payers can combine Player Props with other big markets, build a story of their own – for instance, who will win and who will get more kills than the other player. The storytelling opportunities are rich with BetBuilder. You might be fully invested and supporting one team but might want to bet that the player from the opposite team will have the most kills – this is possible with PandaScore BetBuilder. For example, there is a big anticipation around the semifinals of the League of Legends World Championship, where Chinese team, JD Gaming is going against the Korean T1. Not only that, the community is excited to see JD’s 369 versus Zeus, who plays for T1. With an esports dedicated BetBuilder, the operators can build a campaign around the story – offer the users a possibility to bet on JD’s win if they support the team, and in the same betslip, go for Zeus having more kills than 369, because they think the opposite team’s player will score more kills.

Pixbet is the new sponsor of Corinthians

How To Succeed in The Netherlands: Tailor-Made Casino Games